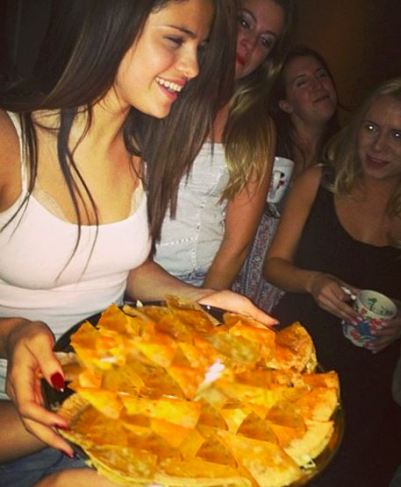 The sudden turns (not so unlike the edge of a block of Velveeta) of Selena Marie Gomez’s life have prompted comparisons, over the years, with various and often incompatible figures from the culinary and professional darts world, from Jamie Oliver to Joe Root, from Daniela Soto Innes to Fallon Sherrock. A lifetime of heat. A lifetime of prickle. The heat of pressure, expectations, competition—imagine a smoky hot barroom filled with lustful glares and whizzing projectiles, the hot stench of stale beer and the friction of horsehair; now imagine hot popping grease, flashing knives, shouted orders for “more bread!” and “more rare steak!” and suddenly someone makes an incorrect Bananas Foster and the whole flaming mess explodes into the eyes and heart and soul of Selena Gomez, into her dreams! (I am speaking now metaphorically, if you will allow.) For a very brief time she lived with a simple man in a deeply forested cabin. He thought she mellowed. He thought her happy. They cooked with garlic, drank wine, sometimes even laughed. Other times they took the rake out around the cabin and raked leaves and sticks. And other times they created “beats” with a hammer and a gasoline can and recorded and manipulated these natural sounds with software apps found on her phone. But after three days, after a sudden, wet and cold blanket of fog, Gomez left the simple (and humble) man. Later (much), under the managerial influence of Bobby B, Gomez removed her Purity Ring and threw it into the Mississippi River during a public charity gathering held on a paddlewheel boat in Memphis, Tennessee. (She has always been a dedicated philanthropist and the Facebook Live event raised over 11 million dollars for the study of glaciers.) She then fainted. The actress is a soprano with a three octave range and holds always close the drama of a soprano, suffering many professional and personal failures, including a passion for and lifetime sponsorship with Sears Inc. (now bankrupt); a personal stock investment into emu burgers and Red Box DVD movie kiosks; and a tumultuous relationship with both EDM pop (a basically deceased genre of music) and with a Canadian director (recently drowned on a whale-watching trip outside Vancouver) of short-length documentary-style films for the Food Channel. Gomez once stated, “I am attracted to the delicate and the fragile and perishable items of the world. I prefer the death of things to the life of them. Winter is my spring.” She also prefers extremely light nachos. Thin yellow, intact corn chips. Water buffalo cheddar (the lowest fat cheese made on Earth). An ephemeral dusting of cilantro. A sneeze of cilantro. A little snowfall, if snow were sliced so thin as to be invisible, so thin the individual curds danced on the wind and curtsied like a sad boss.