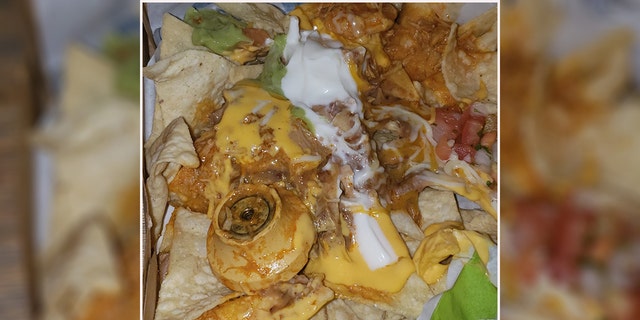 Northeast Hannawah Falls native Sheila Eve Saint claims she got drunk on red wine and water skied on a retention ditch in the morning and then changed into jeans shorts and ordered nachos from the Tex-Mex chain on the Fourth of July, but when she got home and unwrapped her meal, there was an extra item inside.

Saint thought it was either a shiitake mushroom, an unexploded bomb from World War Two, or a doorknob. But I can tell you as someone who studies nachos for a living, it was simply the handle of a device for dispensing nacho cheese, most likey a Ricos 450 model or perhaps a Ricos 900. (Also no aerial ordinance was dropped on upstate New York during the war.)

“I found out its the pump of a cheese dispenser. They hung up on me and told me I was lying then offered me a coupon for a free cup of cheese,” Saint confirmed to Hudson Valley Post in a message.

In a photo Saint shared on Facebook (because if it isn’t photographed and posted online it didn’t actually exist) last Friday, the handle is seen dressed in the nacho toppings, suggesting that it accidentally was placed in the meal before the sauces were added. Taco Bell workers are just people. They have debt and marital issues and sour sheets and dogs tied by very short ropes to dead trees and stuff. Ordinary people.

Eve Saint said she called nine times to Taco Bell and every single worked laughed loudly, not so unlike a horse being shaken inside a weather balloon.

In a statements to Fox news, Taco Bell said they are investigating the situation.

“We take this very seriously. The franchisee that owns and operates this location is looking into this matter and strives to make things right with the customer. We did offer her a cup of cheese and I told her it’s most likely the teen workers. We’ve found them bathing in the sink before. We found them having sex in the Beef Locker. They put things in nachos, yes, they have before, but never like this. Like maybe coins or something little, like Skittles. I mean once Jess put a woman’s shoe in there but that was around Christmas. I have no idea. Jess is hot.”